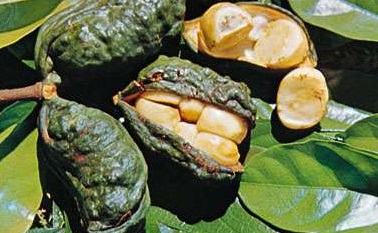 Host of tropical forests, the kolatier is 15 to 20 meters high.

It is only at the age of 15 that he begins to produce fruits assembled in a star which will be picked at maturity and will deliver fleshy, oblong seeds, 3 to 4 cm long and whose color varies from yellowish white to pinkish red.

Imported into Europe at the end of the 15th century, it was not used in medicine until the 19th century.

The Kola nut contains caffeine, theobromine and tannins. These elements give it tonic, stimulating and restorative properties.

The Indigenous chew it to fight fatigue, stimulate nerves and muscles, even quench their hunger and thirst.

Traditionally, Kola nuts decrease the feeling of tiredness and shortness of breath.

These extracts will be combined with Ginseng and taken in anticipation of significant, instant efforts.