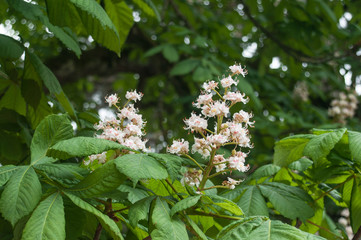 Horse chestnut is a beautiful tree from India, which was imported into Europe in the 17th century.

The legend says that the gardener of the emperor Maximilien planted the first foot.

It was BACHELIER who introduced it to France in 1615. Since then, it has majestically adorned parks and promenades in our cities.

In the 17th century and under NAPOLEON, during the continental blockade, doctors used it for its febrifugal properties in place of cinchona.

However, since 1708, many authors TOBLER, D'ARTAULT DE VEVEY, LECLERC have contributed to highlighting the activity of the horse chestnut seed in the treatment of circulatory disorders; a property that has contributed to relegating its febrifuge component to oblivion.

The very bitter "chestnuts" are also used in the feeding of goats, pigs and sometimes fish.

The flour obtained by grinding is used in cosmetics to make the skin shiny and its pulp in soap.

The chestnut powder, mixed with the irrigation water has the property of eliminating earthworms from flowerpots.

Given its bitterness, we use Horse Chestnut in the form of an extract to combat the problems of poor venous circulation: feeling of heavy legs, hemorrhoids and fragility of superficial micro-circulation.

- to reduce the feeling of heavy legs, or the discomfort of hemorrhoids

Precautions for use: In cures of 20 days per month